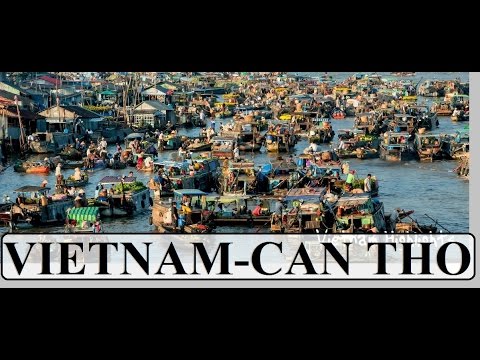 Welcome to my travelchannel.On my channel you can find almost 1000 films of more than 70 countries.
See the playlist on my youtube channel.Enjoy!

Vietnam (Can Tho Floating Markets:
Cần Thơ ( listen) is the fifth largest city in Vietnam, and the largest city in the Mekong delta. It is noted for its floating market, rice-paper-making village, and picturesque rural canals. It had a population of 1.2 million as of 2011, and is located on the south bank of the Hau River, a branch of the Mekong. In 2007, there are about 50 people died in Can Tho bridge’s construction, Vietnam’s worst engineering disaster. In 2011, Can Tho International Airport opened. The name Can Tho is a shortened form of cầm thi giang, meaning “river of poems”. The city is nicknamed the “western capital” (Tây Đô), and is located 169 km from Ho Chi Minh City. Can Tho’s climate is tropical and monsoonal with two seasons: rainy, from May to November; and dry, from December to April. Average annual humidity is 83%, rainfall 1,635 mm and temperature 27 °C.
Life in the Mekong Delta
The Mekong Delta was an ancient Khmer territory. The area was mostly marshland and forest. When the Nguyen Lords took control of this region, a series of canals were built and a system of transportation was implemented in the maze of water ways in the area.
The Mekong Delta is divided into 9 provinces: Long An, Tien Giang, Ben Tre, Dong Thap, An Giang, Vinh Long, Kien Giang, Hau Giang and Minh Hai. The people in this region are made up of Vietnamese and some people of Khmer, Chinese and Cham origin. This accounts for the variety of religions that add to the cultural diversity of this area. Among the religions practiced here are: Buddhism, Catholicism, Cao Dai, Hoa Hao and Islam.
The southwest region of Vietnam is known for the vast rice fields and the huge plantations that make up the core of this region’s economy. The region is also known for the many miles of waterways criss-crossing the land making this area both fertile and unique.
The people living in the Mekong Delta make their living as farmers and fishermen.
Often, they live right on the edge of the rivers or canals on various structures built from whatever materials found. Consequently, the architecture along the delta varies from place to place.
Often, many homes have fisheries right under them. Enterprising individuals build a cage like structure of bamboo beneath their homes on these waterways to house fishes. As the fishes grew, they sell the whole batch to processors from the city and start with new ones.
Life in the delta is tightly woven with its rivers as daily activities and businesses are conducted on its banks. Markets, stores, ship yards, repair shops are some of the more popular trades.
A homestay among the people of the Mekong Delta is an unforgettable experience and can give you a unique insight into the day-to-day lives of the local people. The bulk of the local people here make their living from growing fruit or cultivating rice.
Many of the homes that are open to Western visitors are on the banks of the Mekong River. When you reach the home of your host family, you should remove your shoes. Most families also prefer women to be well covered up.In traditional houses, the sleeping area is open plan and has hammocks and wooden beds with mosquito nets hanging overhead (before the last rays of the sun disappear slap on plenty of repellent, as mosquitoes are rampant throughout the area).
A typical supper is the local favourite, elephant-ear fish, served beit upright on a bed of greens with flourishes of carrots shaped as water flowers. The flesh of the fish is pulled off in chunks with chopsticks and wrapped into a rice-paper pancake and dipped into sauce. This is accompanied by crispy spring rolls, followed by soup and rice (Mekong rice Is considered the most flavoursome).
After dinner some families exchange stories and songs over bottles o( rice wine long into the night, while others cluster around the TV.
The morning starts as the first lights flicker across the water. Before breakfast, everyone takes a bath with the family. Splashing around in the muddy Mekong, fully dressed, can leave you feeling dirtier than when you started! After a hearty breakfast you say your goodbyes and head back to Vinh Long via the floating market.
The Mekong River is the heart and soul of mainland Southeast Asia. The 12th longest river in the world, the Mekong runs 4,800 kilometers from its headwaters on the Tibetan Plateau through Yunnan Province of China, Burma, Thailand, Cambodia, Lao PDR and Vietnam. It is the largest river in Southeast Asia. The river forms the border between Laos and Myanmar (Burma) and most of the border between Laos.