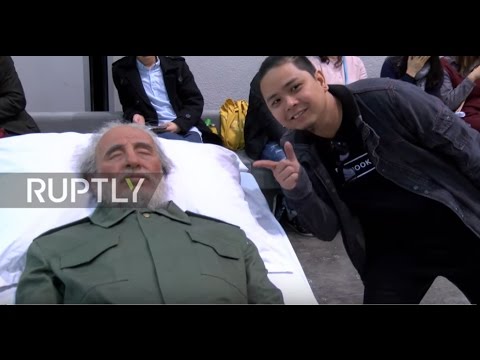 A striking lifelike wax sculpture of the late Cuban leader Fidel Castro was displayed lying on his death bed surrounded by several other legendary communist leaders, such as Mao Zedong, at the ‘Summit’ exhibition at Art Basel in Hong Kong’s Wan Chai area, Friday.

Shen Shaomin, Artist behind ‘Summit’ (Mandarin): “It is not only about Castro, but also his ideological system. It is a different ideological system. [In this occasion we recreated] all the heads of Socialism. We [recreated] the Socialism leaders who passed away a long time ago like Mao Zedong, Lenin, Ho Chi Minh and Kim Il-sung. We made it look like a five-pointed star.”

Miss Lam, Visitor from Hong Kong (Cantonese): “This is quite special because there are quite a lot of political celebrities. So usually we can only see them from far away, but now it feels like – because once they’re dead or they’ve become a wax figure – it feels like we can be closer in observing them.”