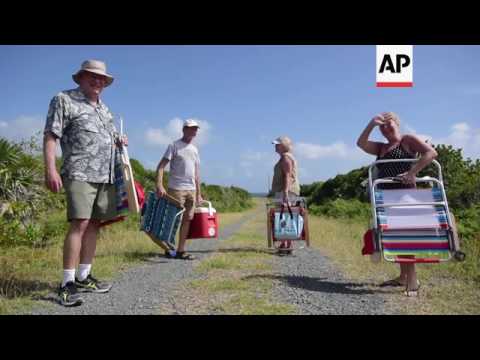 (25 Jan 2017) A small island long known as a Navy bombing range is gradually trying to turn a no-man’s-land into a booming tourist destination.
Vieques, off the east coast of Puerto Rico, boasts gorgeous beaches, turquoise waters and a stunning bioluminescent bay.
But for more than 70 years, most of the island has been off-limits to non-military visitors. Tons of unexploded bombs, rockets and other munitions still lie scattered across the eastern half of the island and the surrounding seabed.
One side effect is that much of the island remains tantalizingly undeveloped, a wildlife refuge whose verdant hills and white-sand beaches attracts some 170 bird species and are popular nesting places for leatherback, hawksbill and green sea turtles.
The Naval Training Range shut down in 2001 and since then the U.S. Environmental Protection Agency has designated much of it as a Superfund site believed to contain contaminants including mercury, lead and napalm.
The U.S. Navy has been working under orders to clean up as much of the place as possible to make it more hospitable for tourists and the more than 9,000 locals alike.
Many activists and Puerto Rico’s health department argue that the years of exposure to dangerous substances have led to significantly higher rates of cancer and other health problems.
Officials with the island’s previous administration began a process to obtain as much as 1 billion US dollars in compensation for environmental damage, but it is unclear if the new administration will pursue that effort.
The cleanup already has cost more than 220 million US dollars, and it’s expected to extend for more than another decade.
So far, crews on land have removed some 31,000 bombs, 1,300 rockets and 600 grenades among other items, some of which were practice round. Nobody’s sure how much remains

You can license this story through AP Archive:
Find out more about AP Archive: